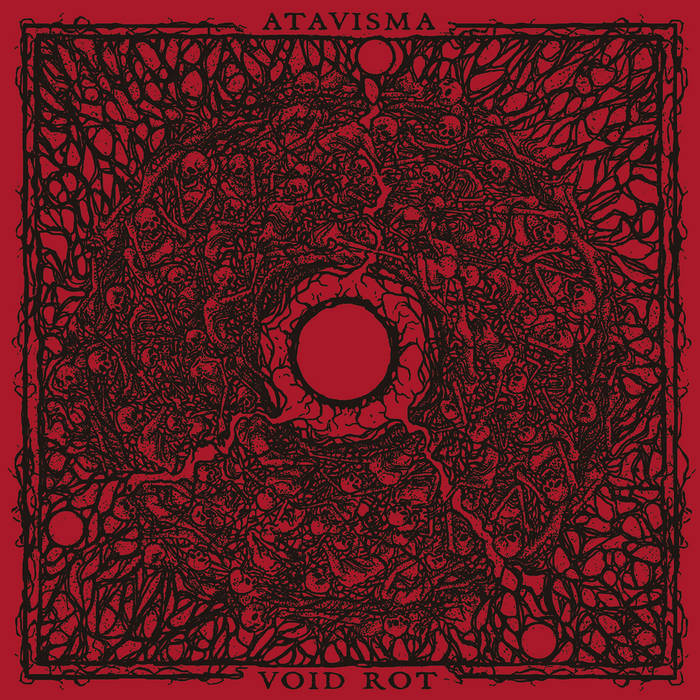 Atavisma & Void Rot, two of the strongest and youngest entities in Death/Doom right now join forces in a vortex of Death and Darkness and prepare the field for the release of their respective full albums.

Atavisma was formed in 2013 by G. and L. After the first demos and intense tour activity between France and Spain the band entered the studio to record their debut album "The Chtonic Rituals".
The band, strongly influenced by the old school swedish sound and the riffage of the NYDM scene, add to the mix their own take of doom and dissonances to create an unique sound and dreadful sonic landscapes.

Void Rot from Minneapolis MN, USA, formed in 2017 with influences from the glorious progenitors of majestic, atmospheric and slow moving death metal like Winter, Rippikoulu and diSEMBOWELMENT, as well as newer entries within the genre such as Krypts, Spectral Voice and Sempiternal Dusk. Void Rot weave light and darkness seamlessly and with unseen mastery, evoking atmospheres of unparalleled vastness that alternate majestically between sidereal and contemplative psychedelia, and visceral and bludgeoning heaviness.

For fans of Incantation, Disma, Spectral Voice and Krypts.

All Void Rot songs and lyrics written by John Hancock.
Recorded in June 2019 at Signaturetone Recording by Adam Tucker.
Mixed and mastered at Subterranean Watchtower Studios by Damian Herring.

Everlasting Spew is a label/mailorder based in Italy with the focus to bring you selected titles from bands and labels that distinguished themselves for their quality. We come from several years of experience in the past and two decades of passion and dedication into the genre.
Death, grind and doom, this is what we deal with. ... more

Track Name: Atavisma - Dread
Pulsating fears in arteries
Guided by murk
A daimon from beyond the curtain
Inextinguishable
Vaporous
Looming
From the hazy womb
Of blackness
But tangible
As a hand
Clutching the throat
Famished for breath